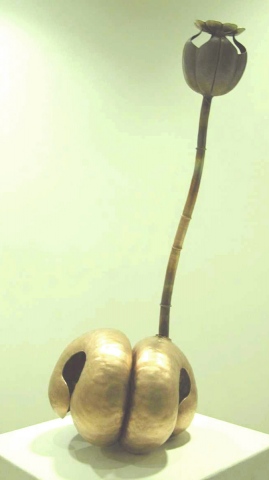 Megolaponera Foetens is a terrestrial ant commonly known as the stink ant that lives in the rain forests of Cameroon. This ant forages for food on the forest floor and on occasion will inadvertently inhale the spore of a fungus. Once inside the ants body the fungus begins to consume its way to the the brain where it begins to control some of the brains functions causing the ant to change its behavior. At this stage the ant appears confused and troubled. In this confused state the ant is compelled to climb up the tree canopy. Exhausted, the ant reaches the ideal height for the fungus and the ant then impales it’s mandibles into a branch. The fungus proceeds to consume the rest of the insides of the ant and soon a spike appears from it’s head. The tip is covered in spores that rain down to the forest floor continuing the cycle. I see this phenomena of nature as a metaphor for certain psychological aspects of the human condition.